The new Disney film MCFARLAND USA is based on the true story of how in 1987 one remarkable high school cross-country track team captured the hearts and imaginations of generations to come.  It only took one incredible coach to inspired McFarland to not only race to win a championship, but to race for their dreams.  As shown in the film, their cheer-worthy and heartfelt story created a spark that helped propel subsequent the McFarland track team to continue winning championships for the next 24 years.  It is said that one spark starts a fire, but that fire can burn forever with the right amount of fuel — and for the students of McFarland High, that initial spark was all it took to show them and, all those after them, that no dream is too big and hard work and perseverance can make dreams come true.

In an exclusive interview, star Carlos Pratts talked about the joy of working on such an inspiring film, as well as what he learned from his co-star Kevin Costner, and where his own dreams have led him in his own incredible life.

How did you first hear about the movie and what interested you in the role?
CARLOS:  The way I heard about it is I got an audition right around the time I was shooting a TV show called THE BRIDGE.  At first, I auditioned for the role of David. I remember going in and being excited.  Then I was asked to come back and read for the role of Thomas the next day.  That was really cool because when they had me read the script for him, I remember thinking, “This character is so awesome, and whoever gets it is one lucky person.”  I just did my best thinking I would try to get the role of David, and yet casting saw something else.  So then I went through this very long audition process and ultimately got the part of Thomas.  I was so excited.

For Thomas, how would you generally describe his journey. What is his part in the movie?
CARLOS:  Thomas is a young guy who has been through a lot.  He does not have much.  He gets up in the morning, he goes to work in the fields, then he goes to school, and each day he does it all over again.  Thomas also sees his father has his own battles and Thomas’ sister is pregnant. So Thomas lives in a world where everyone tells him, “This is all you can have, the rest of the world is not available to you.”  And for the people in the community, that is all they think can be attained.  So Thomas starts to believe it, not having anyone else that believes in him; and because he has been hurt in the past, it makes him very guarded.  Then Jim White (Kevin Costner) comes into his life and he realizes that there is more out there.  It was one of those things where he saw a different kind of love and belief in him, and as a result he thought maybe he could give that to other people.  I really feel that is when his journey really began to change and he started to become the man that he will eventually will become.  It was a beautiful thing.

Is there someone who your character Thomas is actually based on? And if so, where did his journey take him?
CARLOS:  He is a real person, Thomas Valles.  I got to meet him while we were shooting the film.  He went to college and ultimately came back to coach.  [Thomas Valles is currently a Correctional Officer at Kern Valley State Prison and head coach of the McFarland track team.]  I only got to meet him briefly while I was filming and then I got to see him again the first time we screened the movie.  Honestly, he is probably a way cooler person than the character that I played because he was super cool.  When you see smile that big on someone’s face while watching a movie about their life, you think they are happy with it.  I also found out that he’s just happy that it is about his town. One of the reasons Thomas came back was because of what Jim White taught him: to get out there and to go to college and to give back to the community.  He also believes you can do whatever you want as long as you put your heart into it.

Do you believe that?
CARLOS:  One hundred percent!  I grew up mostly with a single mother and my mother never said no.  (Laughs) Well, she told me “no” a lot, but not that I couldn’t do anything.  She worked three jobs and now she is the director of ESL (English as a second language) and she’s a school principal in Texas.

This movie is meant to inspire people and your character is likely to be an inspiration for a whole generation of young people.  How does that feel?
CARLOS:  It’s amazing.  I, myself, had inspiration from people like that.  I have a 9-year old brother, so it hits home very quickly — just trying to change things. This was filmed with a predominant Hispanic cast, but I don’t want people to perceive it as a Hispanic movie.  It’s an American story that just so happens to be set in McFarland, California.  This is a story that I hope that any person, regardless of color, can relate — especially kids.  This movie has several different types of characters that kids are going to relate to and hopefully it shows them that they can do it.  They can look at us and say, “If that person did it, so can I.”  On the flip side of it, this just goes to my goal, which is a Hollywood of no color — that we are all equal — and I hope that translates for the rest of the world.  That’s what I want for the next generation.

Another aspect of the movie is it is a very physical role.  How was it for you to take on a role where you had to probably do a ton of running?
CARLOS:  It was very physical.  I had to train like nobody’s business and it was hard.  The sports that I played prior were football, basketball — I played basketball, but I wasn’t that good — and wrestling.  But not running.  Running is a whole other beast.  The only running I did prior to was like if there was an ice cream truck in front of me.  [Laughs] So I really didn’t do too much.  But it was definitely an experience and I am thankful I had it because I still try to run when I can and, at the end of the day, you realize it is more than just exercise.  Every character that I play, every skill I use, everything counts.

Besides the running, were there any particular challenges in making the film?
CARLOS:  Yeah, I had to stay in shape and stay away from craft services.  That was a big challenge.  [Laughs] I was a little bit bulkier than the other guys and I enjoy my snacks, so that was a challenge.

For you as an actor, what kinds of surprises did you come across working on this project?
CARLOS:  The scale.  Just how many people it takes, especially doing a movie with Kevin Costner.  At any moment, there can be hundreds of people — not including the crew of nearly a hundred people — there were like 500 people there just taking pictures and watching us do what we do.  It’s a little surprising.  But nothing was overly crazy.  Everything was pretty fluid.  Our director ran a really tight ship and you’ll see that on the screen.  Our heart and soul is in it.

What was it like working with Kevin Costner?
CARLOS:  He can be intimidating, I suppose.  But just talking to him was like my favorite thing.  It was a little intimating at first because he is Kevin Costner.  But, honestly, Kevin is just so easy to work with.  He took the time to get to know me and reach out.  We became friends and we were laughing and joking during rehearsals.  When you work with a star of that calibre, and you see the way that he treats everyone on the set, it makes you realize what my mother always told me:  we’re all equal.  You should be appreciative of everyone around you.

How was working on this film different from working on THE BRIDGE?
CARLOS:  Here is the thing about THE BRIDGE:  the majority of my scenes were shot at the studio.  So that was like home and I got really comfortable.  There weren’t really any distractions.  You never had to really worry about a sound problem from airplane or anything like that.  Then for MCFARLAND USA, there was so much shot on location.  So it was different and yet all the same stuff.  You go in and you do your job with these amazing people and create something that you hope people enjoy.

As an actor, whether it is working on a film or a television series, what would you say you are learning from each of these things?
CARLOS:  TV is fast.  Television is so fast.  It’s 60 pages for one episode and we do it in 7 days.  We are then doing 400 pages for a movie over 4 months.  So in television, you really learn to trust yourself.  Obviously, from TV, I learned a lot of technical terms that made me look a little bit cooler on set.  But just the pace is really different.  Also when you do TV, your character is building as you go.  So you get 60 pages on Monday for the first episode and another 60 pages the following Monday, and you are learning as the writers are learning about a character.  It’s all being created in this world.  Whereas, in a film, you have a beginning, middle and end for your journey and you know where it goes.  So they are different things.

I remember watching THE BRIDGE and I watched it live, so I was really shocked when your character Gus ended up dying.  I was like, “What?! They are not going to rescue this character?!”  It drove me crazy.
CARLOS:  [Laughs]  Guess what? I was surprised I ended up dying too.  I didn’t want to die.  I wanted the job!  Thank you for watching.  I got to work with Demian Bichir and Diane Kruger in that and I cannot think of better people work with — and one of my best friends now is Emily Rios.  I cannot think of a better group of people to have learned from.  The past 2 years, I really have been blessed.  To then work with Kevin and Maria Bello, it was really cool.

What do you think viewers are going to appreciate as they watch MCFARLAND USA?
CARLOS:  That no matter where you are from, everyone has their own struggles.  They will appreciate how the film shows the human heart and human soul — and I hope that people see that you have to work for it, but you can get it.  It can happen, you just have to work for it.  Don’t give up on your dreams.

MCFARLAND USA opens February 20th in theaters everywhere in the U.S.  Discover the film that will make you laugh and cheer and which undoubtedly inspire even more students for generations to come. 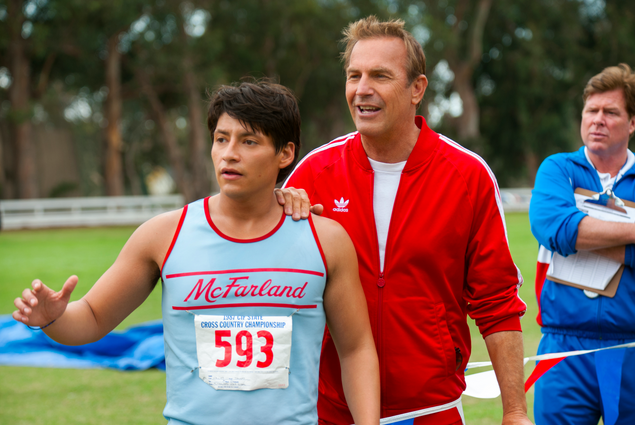 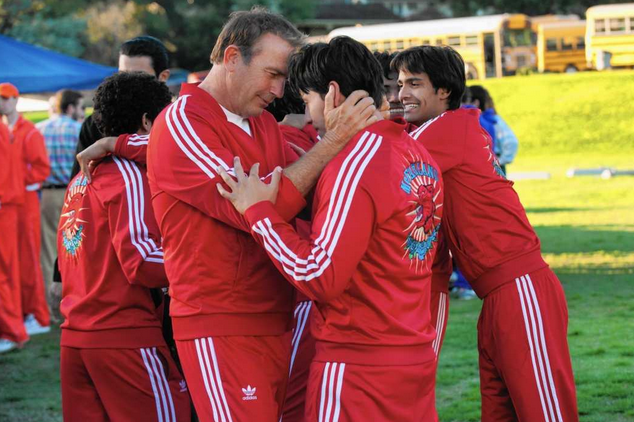