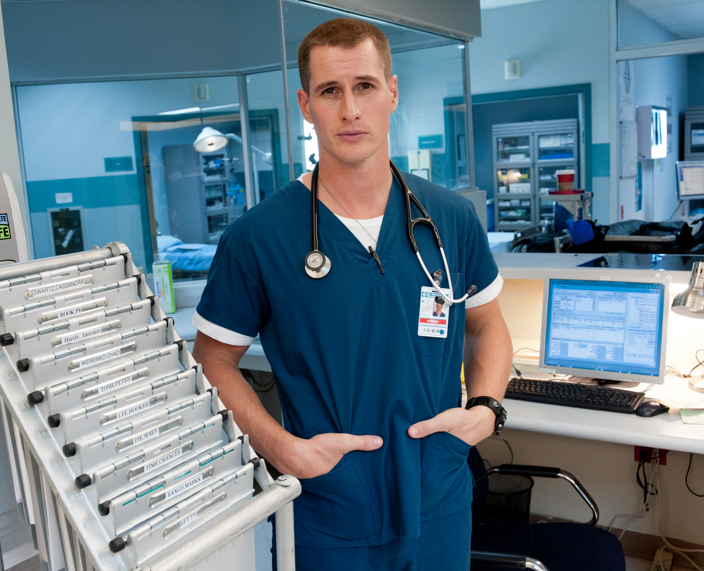 When the day shift ends, the night shift takes over and with that change, a whole new world is revealed as traumas and emergencies seem to take on a whole new level of oddity during the night shift. But no matter how strange, bizarre or even heart-wrenching, the remarkable doctors and nurses in the ER rise to the challenge and save lives every single day. In the new NBC drama series THE NIGHT SHIFT, the show introduces a dozen or so unique characters that pull back the veil on what is going on in their lives and how they manage to keep their sanity and souls intact while witnessing the atrocities of trauma that come through their doors.

In an exclusive interview, star Brendan Fehr talks about bringing his character Drew to life in the heightened setting of THE NIGHT SHIFT and the fun to be had while making this kind of fast-paced, life-and-death show.

You must be pretty happy that the show debuted so strongly last week.
BRENDAN: We are. It was a great premiere for us. We’re still looking forward to and anxious for the next episode, but if you don’t birdie the first one, you can’t birdie them all. So it was a good start.

THE NIGHT SHIFT makes for a good “blue sky” show. It’s what people want to watch during the summer: it’s got action; it’s got romance; and you don’t know exactly where it’s going to go with some of the crazy accidents that your characters encounter.
BRENDAN: I think it’s a good mix. Some people have said it’s not the most intelligent show, which I disagree with. But I think it is a show where there’s enough action and things going on where you can enjoy it. At the same time, I think there’s a lot of things there, especially in the upcoming episodes in terms of the characters and their struggles and what they are dealing with that if you do want to sit down and just watch the show, I don’t think it’s a show that insults your intelligence in anyway. So I think we get the best of both worlds and I think for a summer show it’s a perfect mix. There’s a lot of drama in it and there’s moments of comedy, and I just think it’s fun. I think the people are fun. I think they’re a cast of characters that you want to hang out with.

That’s the biggest selling point. That’s what television is all about. You want to have characters that you want to spend time with week after week, and that’s what THE NIGHT SHIFT excels at and it looks to offer that through the summer.
BRENDAN: I hope so. You never know. A premiere is always hyped up, obviously. But I think we had a good showing with the pilot and I think it gets better from here on out. It’s one of those things where I think the pilot is one of our worst episodes. It sounds awful to say, but it’s similar to what my pastor told me when I got married. He told me and my wife that he hoped it was the worst day of the rest of our lives, and I just looked at him. But if you think about it for a second, it makes total sense. You just want it to keep getting better and better.

That’s an interesting way to look at it. Makes you think for a second for sure. Also thinking also back to the pilot, your character Drew had the jaw-dropping moment with the reveal that he was gay. It wasn’t something we saw coming, so that was an interesting twist. Is that something Drew is going to continue to struggle with — whether to come out of the closet or has he dealt with that issue?
BRENDAN: Through the eight episodes it’s dealt with, but I don’t know if there’s ever a finality to that. I think it’s always going to be a struggle in terms of who you let in and who you tell and do you even want to tell everybody. I’ve gotten a bunch of different responses from people, most of them positive just saying that they enjoyed it and they are kind of looking forward to that, and people have already commented that they can empathize and that they have gone through similar things. Ultimately I hope it’s a character that LBGT community can kind of empathize with and go for the ride. I just hope people, regardless of their beliefs. I played Drew as a human being that’s just going through a struggle. I tried to just create him and take him on a journey that hopefully other people can recognize. I wanted to tell his story in a way that they enjoy watching.

Because of Drew not wanting to talk about his struggle openly, does that create barriers for him to establish relationships with his co-workers? Does it keep him at a distance?
BRENDAN: We explore it a little bit here and there. But this world is a hard enough place to establish relationships and close bonds with people. It’s hard enough when you know who you are and when everyone else knows who you are, and when you can share everything about yourself. And the fact that Drew has something to hide does just make it harder because he can’t be himself necessarily. He can’t say the things he wants to say or do the things he wants to do all the time; and while it’s a great exercise in discipline, which I think could serve him well. It’s like taking a little bit of what’s bad and making it good, it serves him well as a medic and being an ER doctor because he’s going to come up against obstacles where it’s not always going to go his way and he’s going to have to make sacrifices and he’s going to have to make choices that are going to just be hard to make, and he’s got to be okay with that. So I think in a weird way that it could serve him. I’ve chosen to believe that he uses it for that. It’s like fasting: if you give something up or if you sacrifice something of yourself, as hard as that is, inevitably you can use that for kind of a greater good and to learn from it and to establish a character. So I’ve kind of taken that aspect of it — that he views it as an exercise in discipline to a degree. It’s something I think he believes will make him a stronger person.

As much as it feels like Drew is trying to draw strength from his struggle, one of the things that became apparent from the first episode is the night shift crew like to engage in pranks. It kind of gives them a way to blow off some steam in the midst of all the craziness and the trauma they are dealing with everyday. So does Drew allow himself to participate in the pranks, or does he prefer to step away from them?
BRENDAN: After being in the military and being all on his own in the midst of a band of brothers, then being thrust in the midst of this group of people and being in the ER and seeing all these terrible things, and because of the things he’s witnessed, they all need this outlet. They need to be able to laugh and make light of things — even things that you wouldn’t normally make light of. But if you don’t, and because of the secret that Drew’s holding that is extremely hard on him — and as much as it might strengthen him as a person, it’s still really tough. It would be easier and a much better thing to let that go. So I think the laughing and the pranks is an outlet for him. Otherwise it would just be too hard seeing people dying, getting killed and getting shot — especially being a medic overseas and then seeing what comes into the ER — you need that outlet or you’re going to drink yourself to death or become a person you don’t exactly want to become. His other outlet, obviously, is fighting, which let’s him turn that into some levity and perhaps an outlet for his aggression as well. Maybe he gets some of that anger and fear of abandonment and fear of people rejecting him out as well.

THE NIGHT SHIFT cast seems like a fun group. Were there some off-screen pranks as well?
BRENDAN: I don’t know if we had pranks so much. Eoin [Macken] pulled a few, but we mostly just hung out. Because we were in Albuquerque and some of us were away from our families, we just hung out. Nothing too crazy. We’d watch football, have lunch and play games. It was more of just a really good time. I’ve never been to university or college, but it felt like a slightly more mature version of college days on the weekends. It was just us and we just had a good time. We got along so well. Hopefully that comes across on screen. I think it does. We all just respected and loved each other. It’s a great cast.

To see who finds out about Drew’s secret next and what other pasts each of the characters are coming from, be sure to tune in for all new episodes of THE NIGHT SHIFT on Tuesdays at 10:00 p.m. on NBC.