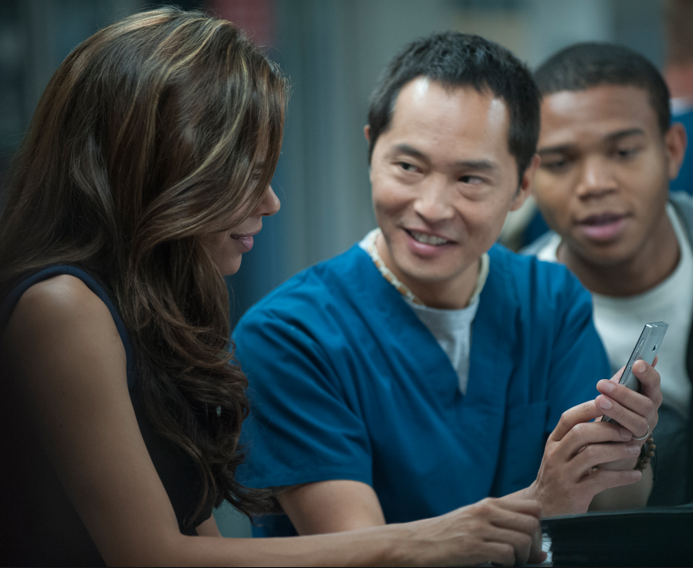 Some friendships stand the test of time, and some have been literally tested by fire. In the case of T.C. (Eoin Macken) and Topher (Ken Leung), their friendship has been combat-tested, as they served as military trauma surgeons together in Afghanistan and that strong bond carries through to this day as they work side by side at San Antonio Memorial Hospital. Having seen every manner of medical atrocity in the field and unable to quiet the ghosts that still haunt them, they seek solace in the night shift and in doing everything they can to save lives — no matter what it takes.

For Ken Leung, portraying the role of Topher allowed for an interesting combination of portraying a lightness inside a character that has to keep his laser-like attention focused not only on the patients coming through the E.R., but also in trying to be a foil for T.C. who needs someone to keep him from taking one risk to many. Topher also understands the deep-rooted history between Jordan (Jill Flint) and T.C. as they all share a long standing friendship that has carried them through some tough times.

Ken feels that viewers are going to be drawn to THE NIGHT SHIFT because it is unpredictable and not what it looks like on the surface. The show will delve more into the personal lives and inter-personal relationships of the characters as they move quickly to help their patients and perform medical miracles.

To hear more of what Ken had to share about working on THE NIGHT SHIFT and how the show deftly balances humor and serious drama, be sure to check out this exclusive video interview:

THE NIGHT SHIFT premieres Tuesday, May 27th at 10:00 p.m. on NBC. (Editor’s note: Special thanks goes to NBC Universal Television Group which made this interview possible with a sponsored trip to the set of “The Night Shift.”)