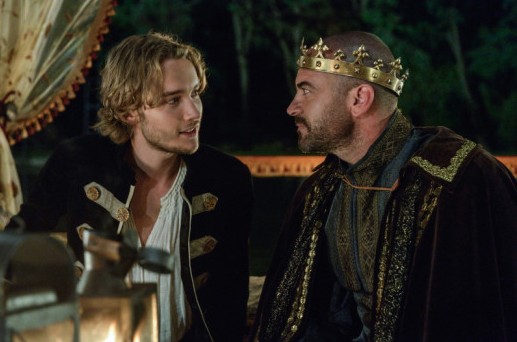 For its first season finale, REIGN is taking no prisoners. It will meet all of its mysteries and conflicts head on and try to answer as many as it can before leaving fans for summer hiatus. As seen in this week’s episode “Higher Ground,” Mary (Adelaide Kane) is no longer a young, tentative queen. She is a ferocious leader and she will stop at nothing to protect her country — including sanctioning the kidnapping of Queen Catherine (Megan Follows) in order to extort a ransom to help Mary’s mother in Scotland and the beheading of Catherine’s overbearing cousin. This is the new Mary, the one who no longer begs for assistance, but rather one who will take what she needs no matter what the price.

Also showing off a new inner strength is Francis (Toby Regbo). He may be the Dauphin of France, but he showed he was willing to set aside his royal cloaks and get in the trenches with his men, risking his own life to secure the position they need to turn the war and bring peace back to France.

With Mary and Francis demonstrating the lengths each will go to for their countries, it will be interesting to find out how easily they can be together as a married couple when neither will want to yield anymore.

In a recent press conference, stars Adelaide Kane and Torrance Coombs, as well as executive producers Laurie McCarthy and Brad Silberling talked about what is next for the royals, their court and their friends as the struggle between French and Scottish interests continues.

Mary’s Darkside
ADELAIDE: I think that began to happen a long time ago. I think it’s been a slow and gradual sort of shift for her. I don’t think anything like that ever happens all at once and all of a sudden. It’s not a switch and you’re ready to sacrifice lives. I think this has been coming for awhile. . . I think she’s been realizing that she needs to make difficult decisions. One life versus dozens versus political upheaval. It is a difficult decision, but a necessary evil. So she’s been slowly coming to terms with being able to live with herself making those choices. It just remains to be seen how far that ends up going, and how far she strays from the path of the noble minded queen that she has always been. It’s whether she ends up like Catherine.
LAURIE: It comes at a moment in her life where men have bowed to her and fought for her and died for her. Referring to the whorehouse massacre, where there were a bunch of Scots who went off and did her bidding — and Catherine warned her in that moment as well that this was going to keep happening. So [Mary] is embracing her power. She is also really cognizant of the cost of that power. This episode (episode 20) was designed to put a finer point on that.
BRAD: There’s beautiful degree of written self-awareness too. There’s great moments that [Adalaide] gets to play where now that [Mary’s] really examining that cost, where she is in that transition, and where she is in her marriage.

Francis’ Return
LAURIE: Francis will return to the castle in very short order, and Leith (Jonathan Keltz) as well.

Effects of Timejump
LAURIE: We moved time a little more quickly towards the end of the season, partly because we wanted to do the Battle of Calais, and we’re faced with certain realities of time on our show. There’s no cellphones; there’s no high-speed train. So time needed to move by quickly for Francis to go to war and win the war, and it happened to service the Lola-Francis-Mary storyline with accelerating the pregnancy as well. Things get more complicated. [Francis] is still unaware that Lola is carrying his child. And with Greer and Leith, when they said goodbye, they really thought they were never going to see each other again. Again, we honor the realities of this time because you cannot change your fate by getting a scholarship and going to college and starting a business; but you can change your fate if you find a noble that can bestow riches upon you or raise your station — or marry the right person. But even then you really need a royal to give you land. The kingdom owned everything. So it was a great opportunity to connect two characters who really had been in each other’s periphery, but never actually met. It will change everything when Leith comes back ’cause he’s a different person. He has different opportunities and different ambitions, as we’ll come to find out as well.
BRAD: He was told to live for the woman back at home. That’s an incredible moment and that will come back.

Mary & Francis
ADELAIDE: I think Mary has kept herself very busy while Francis has been away at war. We’ve established that he is a pretty efficient warrior and he’s a smart man. In the larger scheme of things, I think she does believe he will come home safe-and-sound, but there’s always that concern that life goes on and she has to take care of things at the castle and take care of things for Scotland and pray her letters get to him and his letters back to her will get to her.
LAURIE: The conflicts that happen between Mary and Francis, they happen because [she] is queen of another country and he is king of his country. So it creates this incredible conflict. But who better to be married to and understand exactly what you’re going through.
ADELAIDE: I think if you spend that much time apart, there’s going to be a disconnect when they come back together and then of course with Lola and the baby, and with [Mary] still remaining childless, she’s probably had more time to focus on the fact that she can’t have children. . . But the reunion between Mary and Francis is going to be somewhat very sweet because they love each other and because he’s been away at war. But it doesn’t mean that they don’t still have conflicting patriot duties — that’s never going to change. . . [She’s] also been up to some shady dealings while he’s been away. Even though they love each other so much, they cannot share everything. Not tell each other everything. It’s just no doable. I mean, he ran off with her army.
LAURIE: There was a moment, that we unfortunately cut, when the mercenary tells [Mary]: “I wonder if your husband will recognize you.”
ADELAIDE: She’s changed a lot because Francis is not there to help her. Not that he’s done a particularly good job of doing that this season. He tries and fails miserable, every single time.
BRAD: He does tell [her] that he tries though.

Bash & Mary
LAURIE: They have a bond that is never going to go away. We write to that bond and we honor it, but they are moving in different directions.
TORRANCE: There is those people in your life that you just never really get over, but you do move on. . . There’s other problems going on and Bash (Torrance Coombs) and Kenna (Caitlin Stasey) are working things out.
ADELAIDE: They have bigger and scarier things to take care of.

The Brothers
LAURIE: Another key relationship is the love between brothers. We want to honor that as well.
TORRANCE: To have Bash pursue Mary relentlessly at this point when she has chosen Francis, I think that does a disservice to the relationship between the brothers. It really only became a reality when the legitimization thing happened and it was to save his life. That’s when it sort of became okay to pursue that.
LAURIE: The are things in the woods that Bash has to handle first.

The Finale
LAURIE: Episode 20 (“Higher Ground”) is a build up to — talking about the relationships first — you have seen Francis and Mary almost switch positions from where they were at the beginning of the year where she was a little bit more naive and more of a romantic, and he was more of a realist. I think he’s found his heart and he’s found who he wants to be as king and that will come to a test and a very dramatic conclusion at the end of the season. We’ve talked about what may be happening in the woods and who’s demanding sacrifices and to what end, and those questions will be answered by the end of the season. . . and Henry’s madness.
BRAD: As with everything in this show, there’s nobody who is straight up evil — other than Tomas in episode 4 — but when people are doing bad things, there’s usually a reason for it.
LAURIE: Even with Lola (Anna Popplewell) and Julien (Giancomo Giannotti), you’ll learn more about who he is. When you ask a liar to not lie to you any more, what else are they going to say?
BRAD: Love changes people, and that love between those two characters is transformational for them in a very interesting way.
LAURIE: We’ll see some triangles expand to quadrangles, and some repositioning of people in surprising ways.

Cliffhanger
LAURIE: (Laughs) There’s a bit of a cliffhanger. But I feel like it’s an incredibly satisfying episode.
ADELAIDE: A lot of things come to a head, which is nice.

With two more episodes before the end of the season and so many big storylines to bring to a close — including the birth of Lola’s baby, the monster in the woods, and Henry’s insanity — REIGN will undoubtedly be a non-stop thrill-ride from this point forward and is not to missed. Look for new episodes on May 8th and 15th at 9:00 p.m. on the CW.