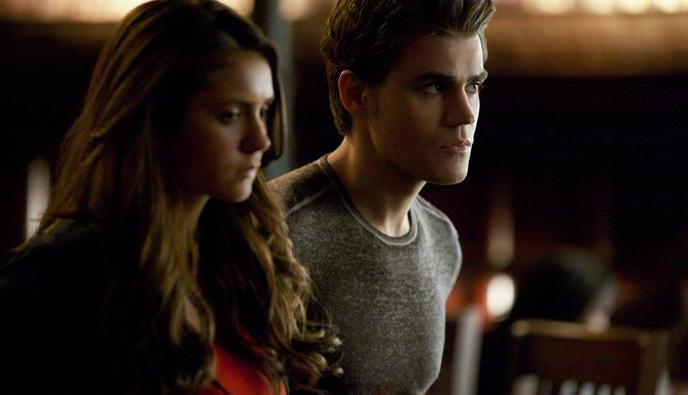 Fans of THE VAMPIRE DIARIES know that the show likes to flirt with the darkness. But this week’s episode goes a bit darker than most. It reveals a dark secret and some even darker motives at play. Fortunately, it allows for our heroes to be heroes and the villains to be villains and everyone gets a chance to play with fire in this episode — some more literally than others. Those Travelers, as we have seen, are quite fond of fire. But this time, it will be someone else who says, “Shall we burn together, you and I?” Fire is employed both literally and metaphysically in this week’s episode “Man On Fire.”

As discovered in last week’s episode, the wall between the Otherside and our world is crumbling and it is causing supernatural spirits to disappear into the void. It is also pulling on Bonnie (Kat Graham), who serves as the anchor and if the Otherside continues to crumble, it could take down Bonnie in the process.

So our heroes have their hands full. First, Tyler (Michael Trevino) is being possessed by one of the Traveler’s passengers — some guy named Julian. Do not worry, you will get to see a lot more of Julian and the crazy mess that Tyler is mixed up in. Those Travelers have something very wicked planned, but in their twisted minds, it makes perfect sense. After all, they just want a place to call home and a chance to live out their lives in peace — although in order to do that, they have to bring about some dastardly chaos and destruction in the process. Every villain is a hero in their own eyes, and this unfortunately is the viewpoint of the Travelers. So watch out for blood to be split, people to be possessed and a dark day ahead for Mystic Falls.

Fortunately, Mystic Falls is used to living in the darkness. It is home to a few generations of vampires, werewolves and witches. A few Travelers should not shake things up too much considering that long history of supernatural inhabitants lurking about.

Then Enzo (Michael Malarkey) is on a mission to find his lost lady-love, Maggie (Heather Hemmens). She is the one thing that helped him sustain his humanity for all those years caged and tortured by the Augustines. But Enzo may not be happy when he does find her. After all, decades have passed since he last saw her. It will lead to a pivotal moment, where someone will say: “Guess I found you first.”

Also lending a helping hand or maybe not are the witchy twins, Liv (Penelope Mitchell) and Luke (Chris Brochu). Just what is up with those two kids? It never seems to go well when they are around.

Two things to look forward to in this episode: the name George and vendettas.

So look forward to the study session from hell, someone getting tortured, someone getting possessed and and whole bunch of other surprises. This is THE VAMPIRE DIARIES, after all. “Man On Fire” airs Thursday, April 24th at 8:00 p.m. on the CW. The search for Maggie is on.