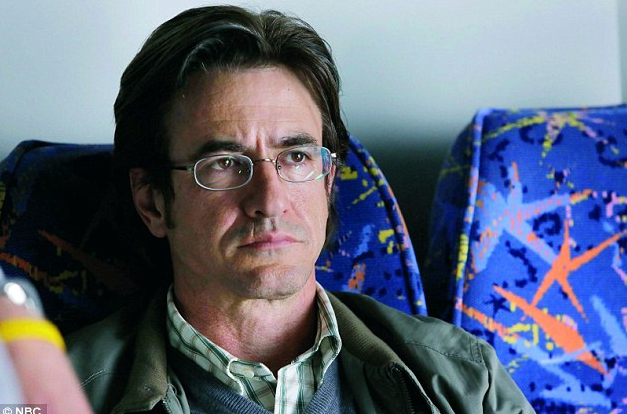 For those who saw the premiere episode of the new NBC drama CRISIS, the big twist was the reveal of the criminal mastermind behind the kidnapping was none other than the one father accompanying the kids that day. Francis Gibson is an ex-CIA analyst and to repay the government that betrayed him, he has planned out the ultimate revenge – he kidnapped the U.S. government’s top officials’ children; and one by one he will the children and their desperate parents to accomplish his diabolical goals. Horribly, one of the kidnapped kids is Gibson’s own daughter, Beth Ann (Stevie Lynn Jones), who is unaware that her father is the traitor behind the entire scheme that has put her and her friends in dire jeopardy.

In a recent press conference call, star Dermot Mulroney talked about his multi-layered character and the fun of playing the villain in this political thriller.

It turns out that Gibson may not be who he first appears to be. Can you talk about the hidden elements of your character?
DERMOT: Sure. There are more hidden elements of the character of Gibson then the current view has any idea about. There’s an incredible plot twist, several of them in fact in the opening episode. But what you need to know is that this keeps happening week after week. It’s what makes this show so fun. As it evolved in its story, I just kept being so pleased by the twists and turn of the plot. So what I say is there’s more to come.

Gibson is a part of the scheme and the kidnapping, but he also has his own daughter involved. Can you talk about how we’re going to see that affect him? Are we going to see him torn and what she has to do with him?
DERMOT: Yes, the story gets really crazy. But what stays the same is how much he loves his daughter and how important it is for him to repair his relationship with her and put his family back together. Now his intentions are good and you will see that his methods are questionable at times, but then you’ll learn how effective it is. So the story makes you really question motives versus results. It’s very smart in that way. Another thing I love about it is there is a lot of story coming at you really fast; but I’m more surprised to how clear it is. In other words, its complex, but it’s not confusing. You’ll see what I mean, it’s really great the way they were able to do that.

Obviously there’s a lot of twists and turns in the story. Did you get to know a lot of that ahead of time or are you kind of learning it as the story unfolded and how does that affect you playing the part?
DERMOT: It is true that I had very little knowledge of what was coming moments later. We’d get the scripts about four or five days in advance, the thing is we did the whole season as planned, so now I know everything and it’s awesome. There’s some really good semi side-by twists in our story that people are going to love.

Is there a clear-cut answer on whether your character is good or bad? And if there is an answer do you have it and do you have a preference as to whether he’s good or bad?
DERMOT: I have no preference, I prefer that people wonder. But I do know for myself and, quite clearly, that he is good. There’s no other choice as the person hired to portray this person than that. But people will wonder that for themselves. Again, maybe I said something to that effect before, but his intentions are good.

Obviously that you didn’t necessarily have all the answers coming in, that you go sort of from script to script. Did you like not having the information? Was this something that was more of a challenge for you? Was it exciting for you sort of coming in and not having all those answers?
DERMOT: Yes, it took me about two or three episodes before I really embraced it and then I loved not knowing. The reading of each script became so enjoyable that I wanted to know what was happening next. But wasn’t going to make the scripts be written any faster. And I should be clear, there were very specific story points that I was aware of and needed to know in order to play the character who knows the whole plan. But I didn’t know how the other characters were going to develop or how their storylines end up crossing, things like that. The intrigue of the story was the reveal for me each week. So I loved it. But not at first, I had to adjust to that way of working.

Was there anything about this character that you added to him that wasn’t originally scripted for you?
DERMOT: That’s interesting. Very little. I didn’t improvise dialogue at all, but the directors that we worked with were really collaborative and well chosen. There were really sort of 12 or 13 different people came in to work on these scripts to shoot the thing. So that’s where my contribution would be just in how the scene plays. But I didn’t change anything in the script. I said every word as it was written. I don’t even think there’s an extra word in that character at all.

What are some of your most memorable moments you’ve recall from filming?
DERMOT: You’ll come to see that a relationship and a dynamic develops within kitchen. So I worked very close with Max Martini who plays Koz. He’s got a mask on for some of it, but he’s the one that amputates my left pinky and our other partner in crime was Jessica Dean Turner, who was a Chicago actress who was also particularly great in the part. So we felt like we had our little team there while the CRISIS crew was off shooting all these other storylines. So it was sort of like you could color code the separate storylines, but then of course they all come together at the end of the season in a very gratifying way, so stay tuned.

How much input are you actually allowed? Could you develop a backstory for this guy or is it all what they tell you?
DERMOT: No, it’s all what they tell you. I would have approached this anyway but I think that television’s sort of more typically works like that. I mean you’ve always heard it’s a writer’s medium and so forth, so I came in knowing that I would just be doing the job that I was asked to do. But that’s how it’s done really. This web of plot was so intricate that there wasn’t anything I could add. I mean that wasn’t my job either. So this for me was fun because I was reading the scripts like a spy novel and then just doing what they said. In Episode 4 I didn’t necessarily know how something I was doing was going to affect something we would shoot for Episode 8. So I just followed the steps as they laid them out in front of me.

What you admire most about Gibson?
DERMOT: There are two things: his his heart and his mind. I very much admire the reasons that he goes to the lengths that he does and makes the decisions he does, which is an intense and profound love for his daughter and his family. But the thing that most impresses me about Gibson is how truly genus he is. Its fun to play a character that is vastly more intelligent than I am, to be frank. It made me feel really smart.

What you think the most challenging aspect of playing him is?
DERMOT: I found it difficult sometimes to contain my evil glee as other stuff takes place later on. I’ll be honest with you, it’s really fun to play that character. My challenge was to play it in a contained and controlled way. I mean there are other aspects to the character that are challenging too, but that was one of them for sure — just to be real cool, I guess.

Once your finger had been severed and you’re in the room with a couple of other people you kept looking at that notebook that seems really important. What can you tell us about that?
DERMOT: The notebook is as much a character in this series as well. Its got its own storyline in a way and it’s one of the best props I’ve ever worked with. I wish I had in my mind the name of the woman who worked on this prop — page after page of intricate drawings, all of which dealt directly with the story — if you can imagine this, there were things in that book when we were shooting the pilot that I didn’t know about until about seven months later when we were shooting the series and that’s when the picture that had been in the notebook the whole time came into play. It was really fascinating for me. Also for me, the double whammy plot where you cut the finger off and then right away it’s revealed that he had planned that, that’s what I think makes this first episode so great. In other words a lot of other writers would have had the one and then a little while later would have had the other. Rand [Ravich] and Far [Shariat] gave you that bing-bang back-to-back plot twist that I think is just irresistible. It’s great the way they structured the reveals in this first episode and we do that throughout the series.

We’ve seen Gibson in the first episode as being pretty surprisingly strong and in control kind of guys. Are we going to see weaknesses at some point soon?
DERMOT: Well, not everything in Gibson’s master plan is going to go as he conceived. So some of the fun parts of the series are to see Gibson think on his feet and have to adapt to the changing situation. So there’s that tension between knowing that he has a great plan and learning that it’s not going according to that plan and what’s the character going to do next. That becomes part of the series. It is a good question for that reason because he’s always close to having everything under control, but it’s not as simple as that. As I said, it’s a very complex story, so he has to adapt as it evolves.

To see what Gibson’s next diabolical move is, be sure to tune in for an all new episode of CRISIS on Sunday, March 23rd at 10:00 p.m. on NBC.