In the NBC apocalyptic series REVOLUTION, it has dared to peel back the layers of one of its principal heroes and revealed that Miles Matheson (Billy Burke) may not have always been a shining of an example of heroism in his prior life.  In fact, Miles was the poster-child of totalitarianism as he ruthlessly aid his best-friend Col. Sebastian Monroe (David Lyons) in conquering the last remnants of the free world after the power went out 15 years before. At the WB Mondo International Press Tour, star Billy Burke shared his insight into the conflicted character of Miles Matheson, as well as sharing how he came to be cast in this grand adventure of a role.

In episode 10, we got to see the standoff between Monroe and Miles, and Miles didn’t, for the second time, kill Monroe. What is going on?  Why can’t he kill him?
BILLY:  I’ll answer that question with a question: Could you kill your brother or sister?  That’s what he considers him.  That is his family.  It’s really the only true family that he’s had in his late childhood to adult life.  The bond that they have is ‑‑ it goes beyond just palling around.  I mean, they created this thing together, this thing that’s happening now that Monroe’s now controlling.  Miles blames himself for a lot of the flaws in that, if you can call them flaws.  So that’s how I justify that.  And beyond that, it’s in the master plan of whatever the writers have planned.  Because we don’t want to kill him off now.  Come on.

What do you identify with most about your character, and what’s biggest stretch for you?
BILLY:  The biggest stretch is actually this guy who has not only a skill for but an affinity for violence.  I am a [wuss]. I just didn’t grow up in that world.  And as a matter of fact, the military in general was my biggest fears as a kid.  You still do, I think, at this point.  When you turn 18, you have to at least sign up for the draft if they bring it back.  Yes, I know.  Amazing, isn’t it?  And that was always my biggest fear growing up.  I thought, “Oh, God I’m going to get drafted.  I’m going to go get killed.”   So any of that, that end of Miles, that’s all just imagination.  I just completely have to draw on absolutely nothing for that.

What’s the stuff that’s most like you?
BILLY:  The jaded, cynical smartass, all that, I’ve seen my way around pretty well.

So it must be kind of ironic for you, then, to be this heroic, kickass guy who people in bars might be a little afraid of now when you think to yourself like, “Oh, I couldn’t kill fly if I had to.”
BILLY:  Either that or they want to kick my ass, so yeah.  Yeah, I spent a good, maybe the first ten years of my career being on the other side of that.  I was the bad boyfriend with the gun.  I was either getting killed, getting beat up.  I died in pretty much everything.  Except for that fortunate string of movies that I got to live through.  But I’m not going to say it’s bad.  It’s nice.  It’s nice to have to be that guy.

But did you do have any trepidation that you could portray this guy since you’re saying you’re the opposite.
BILLY:  No.  I got a lot of self‑confidence.  I’m fine with that.  I mean, I looked at it as one of those kind of dream gigs that you ‑‑ when you’re a kid and you want to make TV and movies, these are the kind of roles that you look for that eventually, hopefully you get one day ‑‑ aside from the guy laying on the floor in a pool of blood.

A lot of people are watching seasons of TV shows now.  They’re buying the box set and looking at the special features.  And your show is definitely going to be one of those kind of shows where I’m sure people are going to want to relive it over the next season and the next season. So do you do that with TV shows?  And what do you think about the new way that people are discovering shows and also about having special features and telling them what happens behind the scenes?
BILLY:  Yeah.  If I ever look at a special feature, be it online or in DVD extras or something like that, it’s by accident and I sort of, almost want to shut my eyes.  Yeah, I have a hard time with the magic of Hollywood being turned upside down and kind of ruined by that stuff.  I personally, as an audience member, I don’t want to know.  I want to be surprised.  I don’t want to go watch the “James Bond” movies and know how they did the stunt.  I just want to watch it, behold it, I just want it to be that.  So that being said, I don’t blame people for having that kind of hunger.  Get it.  But it’s just not for me.

And what about watching the shows on DVD as a set?  Do you do that with any shows?
BILLY:  I have yet to ever get through a box set of DVDs for anything.  THE SOPRANOS, years ago somebody gave me the box set to THE SOPRANOS.  And I might have gotten through the first three.  Not that I didn’t love it.  It was awesome.  But I kind of would rather be doing something else.  But there are things that come on once in a while that I have to see all the way through.  If a certain movie comes on, you flip through the channels and a certain movie comes on, no matter what I’m doing, I’ll have to sit and watch the rest of it even though I’ve seen it 40 times.

How has “Twilight” changed your life?
BILLY:  Well, there’s no question that it was a great gig to get.  I had so much fun playing that guy.  Met a lot of great people, people that I’ll know for the rest of my life.  And the best part about being involved with that whole thing, which I’ve said before, but I’ll say again, is that no matter how you feel about the movies, they are now a piece of Hollywood history and it’s a great thing to be a part of.  But do I want to make more of them?  I don’t need to make more of them.  It’s done.  It came along at the right time.  It caught some lightening in a bottle.  It ended gracefully at a nice time, before the audience was burnt out on it, and it was a great gig. I mean, the recognizability, certainly ‑‑ I mean, like I said before — I spent most of the first part of my career just dying early, in some great stuff and not‑so‑great stuff.  But the audience and fan‑ship that those movies had, that upped it a little bit.

When you get recognized now on the street, is it for REVOLUTION?  Is it for other things?
BILLY:  It’s now mostly because of that, but there’s a lot of crossover fans.  We film the show in Wilmington, North Carolina, and there’s just as many people and families that want to take a picture because it’s Charlie Swan, but they love the show as well.  And, yeah, so there is a lot of crossover.

But the creators never told any of you anything more about your particular characters?
BILLY:  When I went to meet Eric Kripke and Jon Favreau and sat down in a room with them, and they essentially ‑‑ because I originally got hired for David’s role — they were pitching me on that, and they were pitching me on it.  And they flew me back from Vegas, or I had to fly back from Vegas at the time, actually.  I was sitting a poker table, and my manager called me and she’s like, “You got to come back.  They want to meet you right now, it’s going really quickly.”  And I’m like, “Hey, I’m playing poker.  Come on.”   But I went in there to meet them on a Sunday night and they started pitching me on the show.  And to get back to the original question, they sort of gave me an overview of what the show was, the world that it was, what this guy, his character might be and might become, but we don’t know.  And they kind of had me at “hello.”  I mean, J.J.’s producing the show and Favreau’s going to direct and Kripke wrote it.  I’m like, “Guys, let’s stop talking. Let’s do this thing.”  But beyond that, I knew absolutely nothing, so I don’t know much more today except for what we’ve learned and what you guys have learned, mostly.

Then how did you end up playing the other role of Miles?
BILLY:  Dumb luck.  I guess, as far as I understand it, they were looking and looking for this guy.  And we knew the role was open, and I say we meaning my agents and managers.  And I was happy to have the Monroe role, because it was an awesome role.  But we went and shot the pilot ‑‑ or I shot a scene from the pilot in Atlanta, shot one scene and I went home.  As I was getting on the plane to go back to Atlanta to finish up Monroe, I got a call from Kripke.  Literally walking onto the plane, got a call.  He said, “I think you’ll find this good news.”  And I was like, “What do we got?”  He said explained to me that they wanted to offer me the other role, and I was like, “Yeah, let’s do that.”   And I, of course, at that time, I had not any more knowledge than I did of what was going on in Monroe’s world.  So I quickly had to sort of spin myself around to the other mode, and it was awesome.

To see more of the dark history of Miles and Monroe in REVOLUTION, be sure to tune in for all new episodes Monday nights, starting March 25th at 10:00 p.m. on NBC. 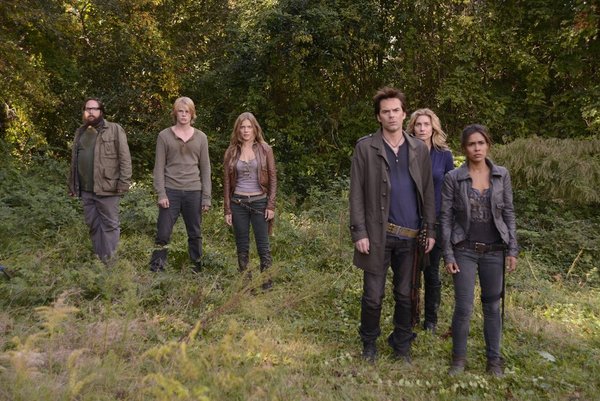