Top 10 lists are tricky things. It can be absurdly hard to narrow down anything to a select group of ten. It’s like being asked to choose your favorite child and you just want to wail, “But I love all of them!” This is particularly true in television. Each year I commit to nearly 100 television shows that air throughout the twelve-month period. Thus, to pare down to the few that were truly outstanding, it can be exceptionally difficult. But there are always a deserving few who manage to do the impossible: sustaining a high caliber of performance and be equally captivating entertainment. As a caveat, there will always be better shows, but sometimes those shows just didn’t manage to be as consistently entertaining. Addictiveness plays a large part of what makes television shows successful. It is a quality that is rare and elusive and can be dependent upon the personal tastes of the viewer. However, when you simply cannot wait to see what comes next, then you know there is something special about that show.

Accordingly, these were the Top 10 TV Shows that I found myself counting down the minutes and hours of each week anxiously awaiting the next episode: 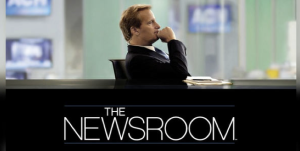 THE NEWSROOM (HBO) – From the first opening scene where Will McAvoy threw caution to the wind and took a stand on the state of news today, I knew I had fallen in love. There is something very laud-worthy about a man willing to stand up for what he believes in and who is willing to tilt a few windmills along the way. Add in the intoxicating dialogue of Aaron Sorkin and some truly captivating characters, it is impossible to not be enthralled. This was also one of those shows you had to rewatch a few times in order to appreciate the whirlwind stories and clever character nuances embedded throughout each. It made it a pure joy to watch each and every time. 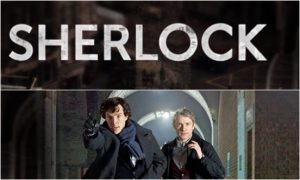 SHERLOCK (PBS) – Just as clever, witty and tricky to keep track of due to all the rapidly moving threads woven through each episode, SHERLOCK dazzled Sherlockians of every era. The dialogue, the characters, the villains – one never knew exactly where to look, but each puzzle pieced made us yearn for more. Plus, it left us all scratching our heads at the marvelous feat of its audacious ending guaranteeing that we’re all counting the seconds ‘til Season 3! 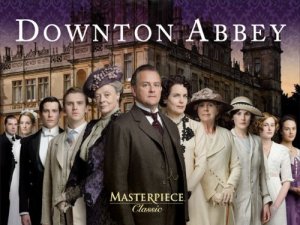 DOWNTON ABBEY (PBS) – A worldwide phenomenon, DOWNTOWN ABBEY took viewers into the intricately intertwined worlds of the upstairs/downstairs lives of its residents. It made us weep with joy and sadness with each triumph and each loss. These characters brought to life felt more real to us, so much so that they became like family. It was also so sumptuously elegant and a feast for the eyes, that our hearts and souls demanded more. Fortunately, the television-gods have smiled upon us and its next season is just around the corner. 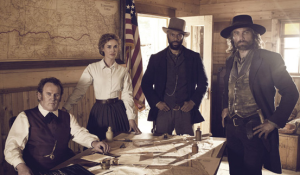 HELL ON WHEELS (AMC) – Quietly slipping under radar, this intense western drama ensnared us with an intriguing mix of old-fashioned justice in the wild, wild west. It also used its rich visual tapestry and intriguing characters to ensure that viewers cared very much its brave, tenacious and romantic heroes. In addition, its second season dared to raise its already dire stakes and challenged our notions of whether good will always prevail when evil abounds in a lawless nation. 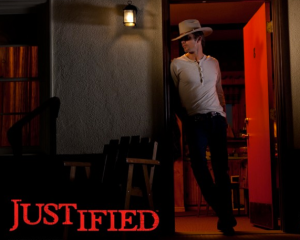 JUSTIFIED (FX) – A reluctant hero with a quick trigger finger paired with a childhood frenemy from the wrong side of the tracks seems an unlikely duo to root for; yet that names Raylan Givens and Boyd Crowder continues to send shivers of delight down the spines of those initiated into this modern western tale. 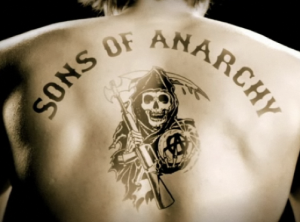 SONS OF ANARCHY (FX) – Because of its audacity in taking a modern day biker’s club and casting it in a Shakespearean tragedy, this outrageous series takes viewers by surprise. But the thorny, tangled world of Jax Teller and his fellow SAMCRO members and all the dangerous elements they encounter with makes for a damn fine drama. 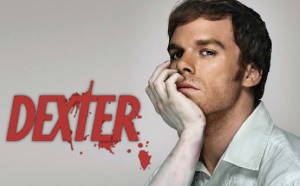 DEXTER (Showtime) – The secret ingredient to this awesome series is a villain you cannot help but root for. No matter how heinous the crime Dexter commits, we find ourselves cheering him on. It is a clever, clever thing to have premised the show about a serial killer with a heart of gold who only kills those who truly deserve to have their presence wiped off the face of the planet. Plus, just when you think this series could not have pushed itself to the limits any further, it surprises us and does it yet again. We literally cannot wait to see what the show does next. 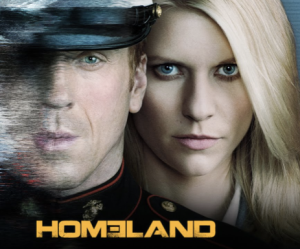 HOMELAND (Showtime)– Just as willing to embrace its crazy side, HOMELAND upped the ante in the story of the reluctant terrorist and the bipolar CIA analyst this season by tackling their love story head on and taking-down the most wanted man on the planet in the process, but then revealing that they had been cast as pawns all along. It was a shell-game finely tuned to perfection. We thought we knew how to keep an eye on the ball and were duped along with the best of them – and we loved every second of it. 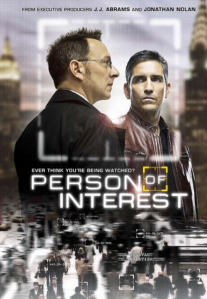 PERSON OF INTEREST (CBS)– Taking what initially appeared to another standard procedural series and revealing its carefully-constructed mythology tempered with a wonderful beating-heart has made this show must-see-TV for those who have faithfully followed it down the rabbit hole. When it ended its first season with the shocking abduction of the man-behind-the-curtain Harold Finch and seeing how his front-man Reese then appealed to The Machine for assistance in getting him back, we suddenly realized that things were definitely not as they seemed on the show. There were a lot more key players on the chessboard – one of which was the A.I. working to keep them all safe. It also revealed a razor-sharp villain who remains lurking around every corner, keeping them and viewers on the edge of their seats.

FRINGE (Fox) – One of the finest science fiction series to ever grace television, this series is wrapping up its fantastic and ambitious storylines with one hell of a ride as it thrust its heroes nearly 30 years into the future in order to fight off the planet’s greatest threat – The Observers (humankind distorted by the tech they had created making them seem like invincible gods). FRINGE constantly reminds us that no matter how advanced we may become at creating new and wondrous devices, advances in medicine, and finding ways to travel between timelines and alternate universes, what remains essential is who we are. What we can do is fascinating, but what remains essential is preserving our humanity in the process. As the series counts down to its series finale, we are grateful to have taken such a miraculous journey with it.

Peering through a lens that appreciates drama in all its forms, these were the Top 10 series that captured my attention and my hear this past year. Kudos to their entire creative and production teams for bringing these magnificent shows to life and to our screens this past year. I know I cannot wait to see more of each and every one of them!

Then because honorable mention should be made of a few shows for bringing their A-game to a single episode, I’m also including a list of my Top 50 Episodes from 2012 (again, in no particular order):

Each of these episodes gave me chills for one reason or another. You always know when you’ve watched something extraordinary because you remember those moments forever. So much of what we watch on television becomes buried in our memories like shifting sands of time. Thus, when an episode or a scene sticks out, it is not only worth remembering, it is worth honoring. These episodes earned such honorable mention for that.