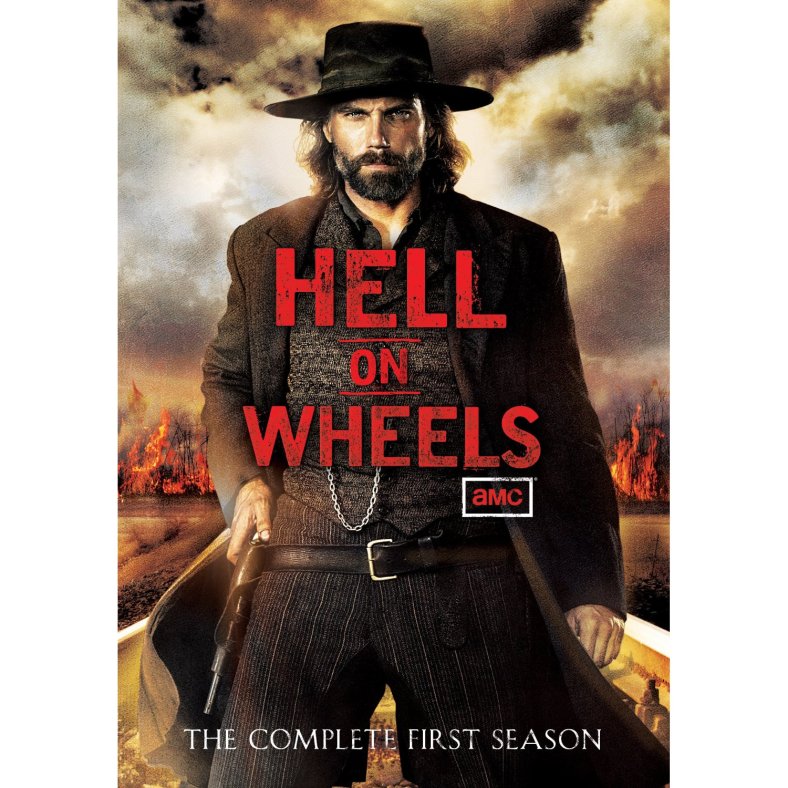 AMC rolls out another winner with ‘Hell on Wheels’.” –— New York Daily News

“Railroads may not seem sexy, but this series brings a There Will Be Blood aesthetic to episodic TV.” –— Wall Street Journal

BLOOD WILL BE SPILLED.  LIVES WILL BE LOST.

FORTUNES WILL BE MADE.  MEN WILL BE RUINED.

THIS MAY, THE LATEST ACCLAIMED TV SERIES FROM AMC MAKES ITS EPIC DEBUT ON
DVD & BLU-RAY™ 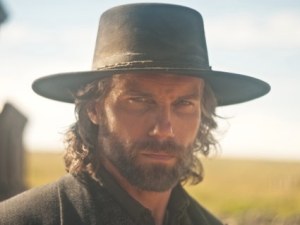 Credited for “helping to modernize the Western genre[1]” when it premiered in 2011, Hell on Wheels centers on former Confederate soldier Cullen Bohannon (Anson Mount), whose quest for vengeance has led him to the Union Pacific Railroad’s westward construction of the first transcontinental railroad.  Currently reigning as the #2 rated show on AMC (with a series premiere that was the second highest rated AMC debut of all time), it is episodic TV at its very best.  And before Season Two rolls into town this fall, home viewers can catch up on all the frontier drama in this star-studded smash with HELL ON WHEELS: THE COMPLETE FIRST SEASON, arriving on DVD and blu-ray this May, only from Entertainment One.

“Hell on Wheels” tells the epic story of post-Civil War America, focusing on a soldier who sets out to exact revenge on the Union soldiers who have killed his wife.  His journey takes him west to Hell on Wheels, a dangerous, raucous, lawless melting pot of a town that travels with and services the construction of the railroad, an engineering feat unprecedented for its time. The lavishly-produced series documents the railroad’s engineering and construction, as well as institutionalized greed and corruption, the immigrant experience and the plight of newly emancipated African-Americans during Reconstruction.  Chronicling this potent turning point in our nation’s history, this fan favorite series shows just how uncivilized the business of civilization can be across 10 absorbing episodes.

Developed by Endemol USA and produced by Entertainment One and Nomadic Pictures, Hell on Wheels is created, written, and executive-produced by Joe and Tony Gayton (Faster, Uncommon Valor, The Salton Sea, Bulletproof).

AMC’s new post-Civil War drama HELL ON WHEELS is a lush, visually stunning and, at times, graphic account of revenge and retribution.  In 1865, America was uneasily settling into a routine where the North and South had put aside their differences.  But old tensions were still bubbling beneath the surface; and battle wounds, scars and seething rage were testament to the recent civil war.   The lure of the open West and money to be made through the ambitious pursuit of building a railroad across America brought men together so long as they could leave the past behind.  While the old plantation owners, former slaves, and retired military officers could see the sense of turning their backs on the past and looking to the future, the only ones not to quick to jump on the bandwagon to modernize were the Indians.  Greed and power were pushing the railroad barons to race to build a railroad to bring prosperity across the land, but with time working against them, funds running low and a hostile indigenous population, it is not going to be easy.

HELL ON WHEELS focuses on a handful of people whose lives intersect at the boiling point.  There is Cullen Bohannon (Anson Mount), the former plantation owner, who is intent only hunting down the men who killed his wife but who becomes intertwined in the affairs of the railroad due to his strong honor and sense of justice.  There is Elam Ferguson (Common), the former slave seeking to prove his newfound freedom makes him equal to any man and who finds himself reluctantly bonding with Cullen due to the secrets they both hide.  Then overseeing the railroad and lording over everyone is Thomas Durant (Colm Meaney), the railroad tycoon who believes his vision of the future is paramount to America’s success and who finds himself crippled without the crucial surveyor maps to finish the railroad.  And on the sidelines are the surveyor’s wife, Lily (Dominique McElligott), who becomes the most sought after woman because she has the one thing everyone is looking for.  Adding to the diverse and fascinating cast of characters are the Irish brothers, Mickey (Phil Burke) and Sean McGuinnes (Ben Esler), who have come looking for financial opportunity and a little fun; Joseph Black Moon (Eddie Spears) the reformed Cheyenne Indian who embraced Christianity and became the local preacher’s son; and the enigmatic Norwegian known simply as The Swede (Christopher Heyerdahl) a former bookkeeper turned private security and enforcer for Durant.  As all their lives come together in a collision of fates, they are forced to rely on each other and yet keep watchful eye out for the first scent of betrayal.

It is a high-stakes game of vengeance and greed.  But, as each is acutely aware, the sins of their past haunt them and came be used against them if they are not careful.  Well, not everyone has terrible sins to account for, but each certainly has secrets they wish to keep buried.

HELL ON WHEELS starts off slow as it introduces its rich tapestry of characters and drops hints of their backstories.  But given time, over the course of its initial five episodes, it weaves a tale that seduces viewers into a world where everyone is looking for redemption, freedom and a bit of happiness.  Give it that chance and you too will discover the gold buried beneath the surface and a story that is worth investing in.  Find out if the heart of a wounded hero gets his revenge, if the lost surveyor’s wife is rescued, if the former slave finds equality, and if the railroad baron finds his precious maps to make America as great as he envisions.

At the beginning, a doomed man says, “we opened a dark door and the devil stepped in.”  Life in the after-math of the Civil War was not peaceful and yet America as a nation had to heal.  The secret to healing lies in finding a reason to live and forgive — if at all possible.  HELL ON WHEELS is a tale of this hope, courage and determination.  It is raw, bold and beautiful.  It will grab your heart in unexpected ways.  Hold on tight — it’s worth it!

Updated: HELL ON WHEELS returns with its 2nd season on Sunday, August 12th on AMC. 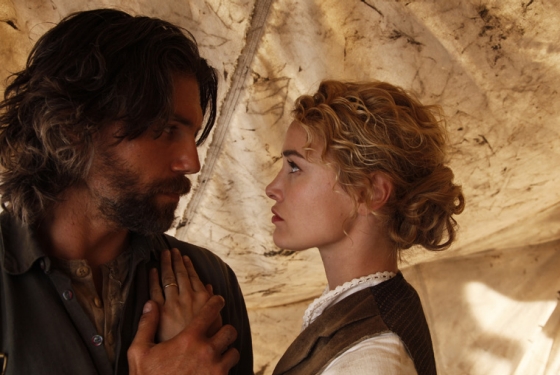 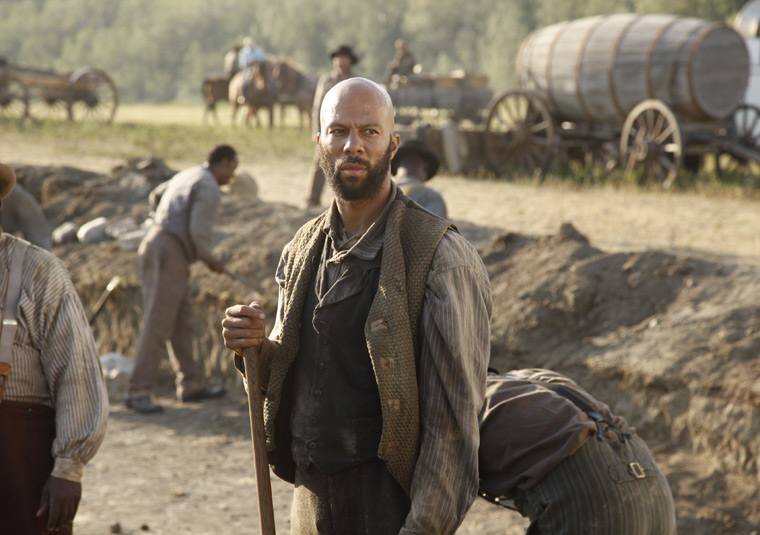 Common in “Hell On Wheels”

Eddie Spears as Joseph Black Moon in “Hell On Wheels”

Dominique McElligott as Lily Bell in “Hell On Wheels”

Common as Elam Ferguson in “Hell On Wheels” 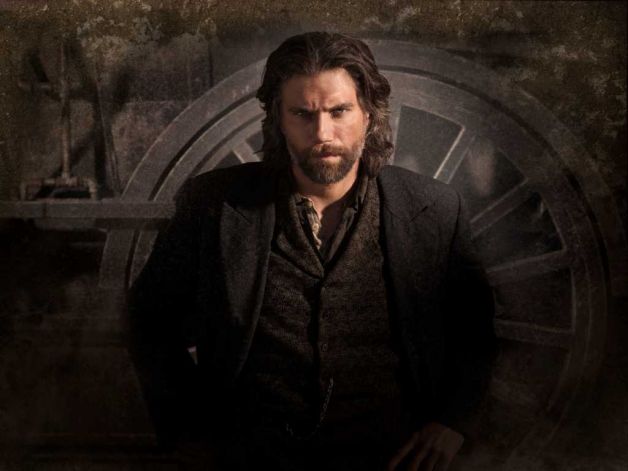 Anson Mount as Cullen Bohannon in “Hell On Wheels”