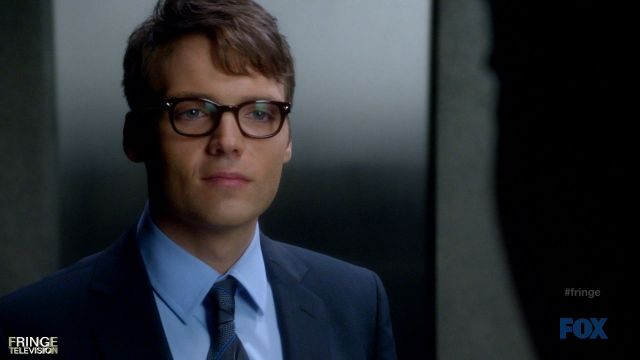 Last season FRINGE offered the brutal premise of Olivia Dunham having been kidnapped and replaced by her alt-verse doppelganger Fauxlivia, only to find out that Fauxlivia was later pregnant with Peter Bishop’s child – a revelation that strained Olivia and Peter’s relationship on all levels in a non-stop roller-coaster ride of alt-verse shenanigans.  The one silver-lining from all of that was how it ended up bringing Fauxlivia and the alt-verse Lincoln Lee together for one magnificent scene in which it hinted a future where they could be a family: Lincoln, Fauxlivia and baby Henry.  (See my prior article “A Twist of Fate: An Unexpected Love Story Blooms Amidst FRINGE’s Tragedy”.)  However, the 3rd season finale threw a monkey-wrench into everyone’s futures when Peter activated “the machine” and effectively erased himself out of existence.  (See my article: “Inside FRINGE’s Puzzlebox: Has FRINGE Lost Its Heart and Its Hero?”) 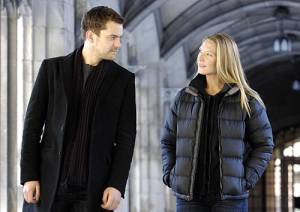 The 4th season then premiered to a world where Peter Bishop did not exist in our universe or the alt-verse.  The only saving grace was that Olivia and Walter’s love for Peter was so strong that even though Peter had been erased, traces of him remained in their memories.  It was the strength of their love and those residual memories that provided a life-line which Peter clung to and allowed him to find a loophole in time and he re-emerged for a second time in Reiden Lake with the help of The Observer September, who only wanted to fix his mistake from all those years before.  So this season has been less a roller-coaster and more a journey of self-identity. Peter had to find his proper place in our universe again.  It was unsettling for him and for viewers when he finally returned and no one remembered him.  The man who had been vital to both universes before was suddenly an anomaly – a “man out of time” and which no one remembered.  But Peter’s mere existence began to reformulate his world around him.  Those memory traces in Olivia and Walter’s minds began to slowly resurface.  They also began emerging as the Olivia and Walter that Peter knew and loved as well.  Then in the episode “A Short Story About Love,” The Observer September finally confesses to Peter that Peter is already home, which sends Peter rushing back to Olivia who has regained her memories. 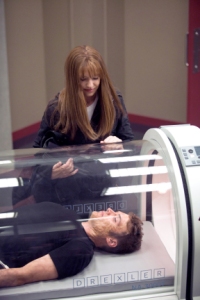 All of this is wonderful and beautiful, but it overshadowed the significance of the parallel love stories involving Agent Lincoln Lee and Olivia in our universe and Captain Lincoln Lee and Fauxlivia in the alt-verse.  In Peter’s absence, during the time he had been “erased,” we were able to see what life would be like in our universe without Peter.  It showed the beginning of a partnership, friendship and possible blossoming romance between Olivia and Agent Lincoln Lee.  (See my prior article: “How Seth Gabel Is Stealing Hearts In Both Universes of FRINGE”) Alas, Peter’s return nipped that in the bud before anything could really develop.  While Olivia was curious and then later grateful for Peter’s return, and her memories of their life together and the love they shared; it was a painful loss for Lincoln.  He had seen the glimpse of his future and it had held Olivia.  Imagine his pain at this sudden and unexpected loss.  One which he bore bravely and honorable as he stepped aside acquiescing to Olivia’s choice to be with Peter.

But Lincoln’s pain and sudden displacement from his own life, in our universe, was felt keenly.  Oddly enough, he then became the “man out of time.”  Sensing that he was not wanted or really needed, Lincoln took the bold initiative to visit the alt-verse, where his doppelganger counterpart existed (Agent Lee and Captain Lee had met briefly in an earlier episode entitled “Back To Where You’ve Never Been”).

In last week’s episode, entitled “Everything In Its Right Place,” we followed Agent Lee into the alt-verse for a special Lincoln Lee episode.  It was hilarious, joyous and full of adventure as Agent Lee and Captain Lee teamed up to track down a shape-shifter.  But the adventure came to a screeching halt as a gunshot rang out and one of the team fell to the ground.  Strong, boisterous, invincible Captain Lincoln Lee had been shot in the chest.  Having seen him recover from his extensive burns from the 2nd season finale (“Over There, Part 2”), we had no idea that this time would be different – that he was not bulletproof.  The injury did not appear life-threatening, especially given all the advance medical treatments available in the alt-verse.  So it was with horror and heavy-hearts that we later learned that Captain Lee had not survived.  The shock of his sudden death has left us reeling.  To know that he and Fauxlivia had never had a chance to discover their love in their universe, let alone be the family that they should have been with baby Henry (who had been erased when Peter activated that blasted “machine), was heart-breaking.

Then came the small glimmer of hope amidst the tragedy.  Agent Lincoln Lee had seen a whole new world of possibilities when he had traveled to the alt-verse.  He also had the chance to talk with his doppelganger to discover when their lives began to diverge: where one became a confident, successful leader and the other became a subservient follower.  They were at the core the same man, just on different paths because of the choices they each made.  In the alt-verse, Agent Lee was confronted by a mirror-image of the man he wanted to be.  And but for that fateful shot, Agent Lee may have simply returned to our verse and resumed his life as it was before, knowing that he could be a different man, a better man, if he chose to be.  Yet fate had presented a unique opportunity: he could stay in the alt-verse and also become the man he wanted to be.  Returning to our verse promised only to serve as a reminder of the past choices he had made and the love that he had lost. Olivia had chosen Peter long before and she was Peter’s forever.  But by staying in the alt-verse, Agent Lee would not be replacing himself; it is just that there may be a place for him in that universe.  After all, there was no Peter to compete for Fauxlivia’s affections in the alt-verse.  In fact, Fauxlivia had no memory of Peter from before.

It is ludicrous to assume Agent Lee could replace his doppelganger self.  In fact, that is not what he is doing.  He is still Agent Lee, and everyone knows it.  He would have the chance to be himself, but in a better world – a world where he was expected and presumed to be a hero.  It may also present an opportunity to discover love again, albeit with a different Olivia.  The fact that Fauxlivia did not send Agent Lee away is a good sign.  She may mourn the loss of Captain Lee, her friend and comrade at Fringe Division, but that love also had not yet fully blossomed.  There is still time for both Agent Lee and Fauxlivia to discover a love all their own.  It is a twist of fate.  But it could also be destiny.  Or maybe it is just the universe — both universes — trying to reestablish balance again.  Whatever the reason, that seed of hope has us cheering.  To have the possibility of love rise out of the tragedy helps soothe the pain over the loss of Captain Lee. There may only be one Lincoln Lee now, but one is enough.  May Lincoln Lee be given that chance to be the man he yearns to be and to love again.  We will gladly follow that love-story!

“Executive Producers Jeff Pinkner and J.H. Wyman Tease What’s Next and Where the Show Is Going on FRINGE”

“Inside FRINGE’s Puzzle Box: Has FRINGE Lost Its Heart and Its Hero?”

“A Twist of Fate: An Unexpected Love Story Blooms Amidst FRINGE’s Tragedy”

“Torn Between Two Realities: Is it wrong to love the alt-verse on FRINGE more than our universe?”

2 thoughts on “FRINGE: Looking Through the Alt-Verse Lens, Who Died and Broke Our Hearts? (2012)”